Our fifth employer benchmarking survey took place between 23 and 30 June 2020, and looked at the changes to the furlough scheme, risk assessments, homeworking equipment, employees stuck abroad and a range of other issues about the ongoing impact of Covid-19.

Details of our earlier survey can be found here. The findings of our most recent survey are summarised below.

Employers are steadily working their way through Covid-19 risk assessments

More than half have now completed their risk assessments (up from a third in our previous survey), although very few (just 6%) have reached the stage of publishing the results on their website as recommended by the government for employers with 50 + employees. This reflects findings in earlier surveys that employers are proceeding cautiously and not rushing to reopen workplaces.

Many employees have been working at home by “making do” with whatever equipment they already had or subsequently bought. With homeworking looking set to continue in the short and medium term, we asked about policies for providing or funding equipment. Most employers have a policy on providing equipment for homeworkers and only 9% have not yet decided what to do. Some large employers made the headlines with their policies of giving all employees one-off cash grants to buy equipment. In fact, this approach has been adopted by just 9% of our survey respondents, with the majority (56%) choosing to provide equipment rather than cash and doing so only when the employee asks for it.

We know from earlier surveys that employers are fully expecting work to be done more flexibly in future, with more work done from home than in the past. We are anticipating flexible working requests to come in as offices start to reopen, but our survey shows that employers are already having to manage requests for permanent change. 25% of our respondents have already had requests for permanent homeworking or increased flexibility over working hours, despite the future being so unclear at present. The comments confirm that our survey participants are expecting more flexible working requests, and that this is likely the tip of the iceberg.

We asked about how employers are planning to deal with compulsory quarantine periods imposed on employees going on holiday overseas when they return to the UK. Allowing employees to work from home is by far the most popular option, with 82% of employers adopting this approach. None of our survey respondents planned to insist that employees take extra holiday or unpaid leave to cover quarantine where homeworking is a viable alternative.

We also asked about the situation where the employee’s job can’t be done from home and, while most survey participants did not think this scenario would come up for them or have not decided their policy position, the others mostly favoured requiring employees to book extra holiday to cover the quarantine period.

More than a third of employers (38%) reported that they have employees who travelled to another country before or during lockdown and who are still “stuck” there (e.g. because they can’t or don’t want to return). This reflects our experience of advising clients in recent weeks who are becoming increasingly concerned about the employment law, tax and other implications of these ongoing arrangements. Anecdotally, this group of employees may be amongst the first to put in requests to work from their home country on a more regular or permanent basis.

So far, most of our survey respondents have been able to avoid any disputes with employees who are unwilling to return to work, either because they are not asking anyone to return yet or because they have been able to resource the business with staff who have volunteered to work. Only 13% have encountered the situation of asking an employee to return to the workplace who then said they were unwilling to come back.

Concerns about travel were the most frequently raised concerns by unwilling employees. Case-by-case resolution of these disputes is ongoing, with comments suggesting that employers are using a combination of solutions to try to resolve the dispute.

Wind-down of the furlough scheme and introduction of flexible furloughing

60% of our survey respondents are currently using the furlough scheme and two thirds of this group are considering making use of the new flexible furloughing arrangements to bring employees back part-time. However, many (18%) are somewhat put off by the complexity of the calculations and some (9%) are ruling out flexi-furlough altogether because of this. Bringing staff progressively back from furlough is the most favoured alternative.

We asked if the gradual tapering down of government support will affect decisions to continue with furlough arrangements. Employers are split here. 44% of those using the furlough scheme confirmed that they will look to make changes to current furlough arrangements as the scheme winds down and employer contributions increase, such as by continuing to reduce the numbers furloughed. Interestingly, for most of those employers, even the modest contributions expected from employers in August will be enough to trigger changes such as redundancies.

We asked if employers expected to receive grievances from employees about the furlough process or arrangements. While a quarter of our survey respondents said that they are already facing or are expecting grievances, three-quarters said that there was nothing that caused them to believe that any furloughed employees had cause to bring grievances. This especially encouraging, given the scheme has been so fraught with uncertainties.

Finally, the media has reported instances of employers promising to repay money claimed under the furlough scheme because their trading conditions have improved or not turned out to be as bad as expected. Our survey suggests that this will be a serious possibility for only a small minority of employers, with just 9% of our survey respondents reporting that they are considering or expecting to consider this.

For an infographic summarising the key conclusions, click on the image below. 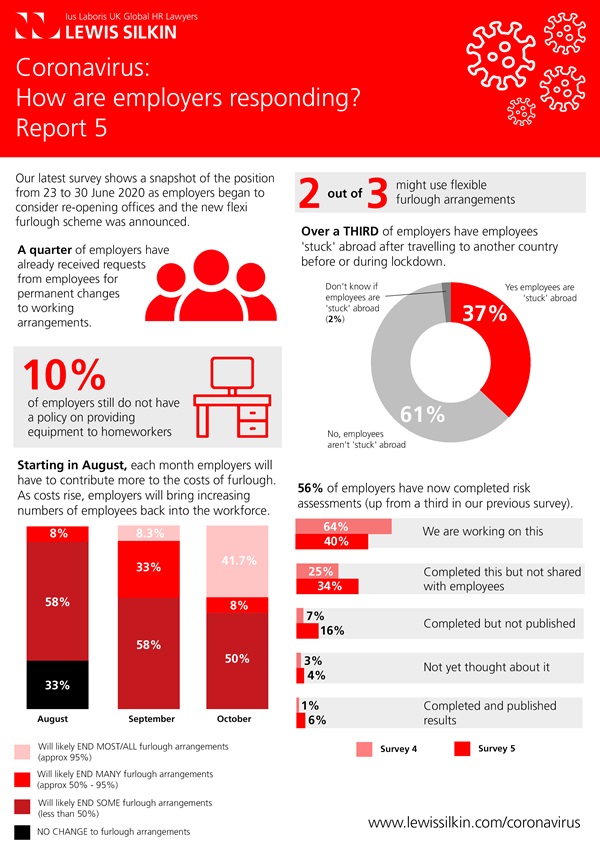